Although this site is entirely dedicated to discussing the wines of Pennsylvania, it’s safe to say that our state borders have been drawn somewhat arbitrarily, and thus some PA wine is more like NY wine (or MD wine, NJ wine, etc.) than each other. I’m also a firm believer that better consumer understanding of the potential for quality wine on the east coast — anywhere — can help every winery from Vermont to North Carolina. With that in mind, I happily accepted an invitation from the Virginia Wine Marketing Office to a virtual tasting of eight wines to celebrate VA wine month.

Virginia wine is a perfect model for Pennsylvania wine to emulate. The industry has grown immensely over the past decade or two, in both quality and quantity, as well as reputation. Though obviously this particular tasting was curated to showcase the best of the state, there’s a consistency here that others on the east coast (with the exception of the Finger Lakes) have yet to achieve, and a notable lack of unripe “east coast” flavor that tends to mar even the best PA (NJ, MD, etc.) tastings.

In addition, as close as VA is, it seems a worthwhile destination for those inclined to visit wineries while traveling. (Especially while going further afield is off the table.)

Anyway, to my thoughts on specific wines… 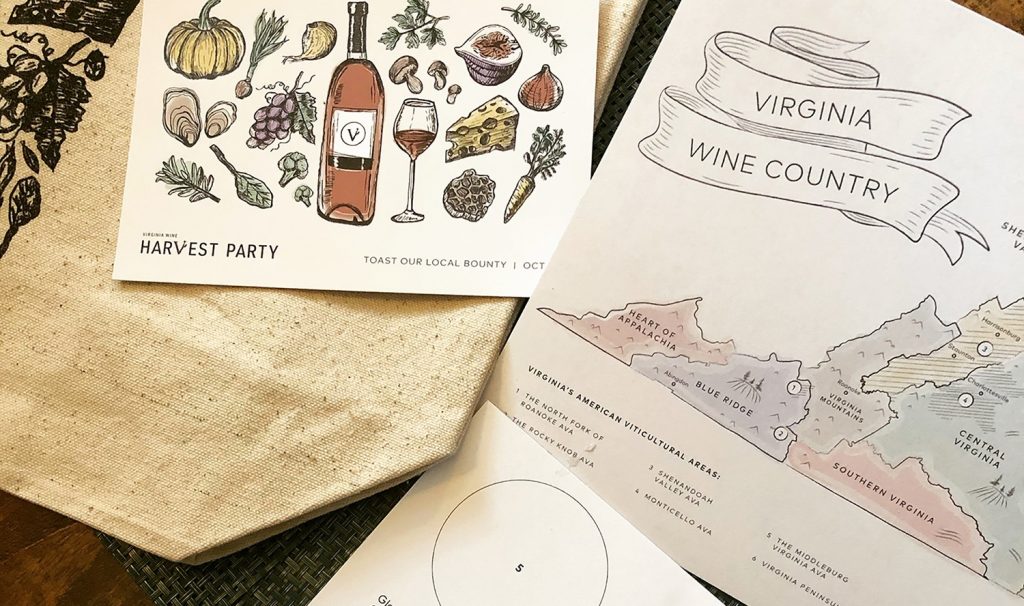 The savory signature of Viognier often smells and tastes like fresh rubber to me, so in my experience it needs plenty of ripe fruit to push that to the background. Thankfully this one features a ton of sweet stone fruit and a creamy, slightly tannic texture (fueled by lees aging). 12% Vidal Blanc (a hybrid grape) adds brightness. Though this hasn’t entirely made me rethink my opinion on Viognier, it makes a good argument for why VA wineries are betting heavily on it.

Linden is one of the giants in VA (and the east coast, really), a legendary pioneer. This one backs up the hype. Made in the Loire style — more savory than fruity, it has HUGE acid, alongside lovely slate or perhaps chalk notes on the finish. It will never be confused for a NZ or CA Sauv Blanc, that’s for sure. A touch of Semillon adds some honeyed sweetness, which was a wise choice considering the lead grape’s austerity.

An obscure variety primarily grown in Gascony (Southwest France) and used for blending or to make dessert wine, Petit Manseng is apparently building a following in VA for its ability to handle the humid, wet autumns. Also — if this one is any indication — it manages to showcase both deeply ripe fruit flavors alongside bracing acidity. There was some discussion of potential for this to become VA’s “signature grape,” but I wonder if it isn’t just a bit too odd to ever earn widespread admiration. It was absolutely fascinating to try, but I anticipate that the aggressive up-front sweetness — bruised apple and very ripe tropical fruit — would grow tiresome, even considering the incredibly crisp finish.

This is a balanced and lovely Chardonnay. (As a nerdy wine writer, it is admittedly hard for me to get excited about that… though it is also a good value.) If anything, I do find it a touch aggressive at the moment, and would thus love to try it again in a year or two.

This is a riper style of Cab Franc that what we typically get in PA. Rich and complex, though the alcohol is notable. It brightened as it opened, so I was disappointed when my sample ran out… it appears a full bottle would have further charms to offer.

Simply fantastic – everything a so-called Bordeaux blend should be: deep, purple fruit, plenty of spice and savory notes, rich and lush, yet light enough on its feet to avoid plodding. Complexity is already there, but should grow with time. Absurd length: literally minutes later, I am still tasting nuances as they evolve. Wine critic James Suckling called this “probably the finest red ever made in modern Virginia,” and I can easily believe him. (56% Merlot, 23% Petit Verdot, 15% Cabernet Franc and 6% Cabernet Sauvignon)

A fruit and oak bomb of considerable heft. Blind, I’d never guess this came from the east coast! Fans of rich, jammy Cali Zin or Aussie Shiraz will be quite pleased with this one… though the tannin is perhaps a bit more aggressive.

Hoo boy! Is this fortified? The nose seems to think so. Made from frozen Traminette grapes (a Gewürztraminer hybrid), it’s rich, sweet, and decently balanced. If anything, a touch more acid would help cleanse the palate. Nice value for an ice wine though.